The skies could get crowded very soon, according to the Federal Aviation Administration’s recently released forecast for the next five years. Some of the numbers in the report might give us a look into upcoming FAA drone policy changes.

The administration estimates rather large increases for the number of drone pilots,  hobbyist and non-hobbyist unmanned aerial systems. The FAA provided a baseline estimate as well as optimistic and conservative forecasts for each of its predictions. Even if the trends end up falling along the conservative lines, the growth of drones over the next five years will be exponential.

Let’s look at five big takeaways from the FAA drone forecast. But first we’ll run over some background information.

The Numbers We Know

The FAA drone forecast provided a breakdown of some numbers. Here are some highlights.

Now let’s look at what stands out with the forecast.

5. The commercial UAS fleet size forecast is based out of assumptions concerning operating limitations for sUAS over the timespan. The forecast was made with existing regulations, including daytime operations, within visual line of sight, and signal pilot operating only one UAS at a time. The differences with the high and low assumptions came from the different assumptions about what will happen with those regulations.

The small model hobbyist fleet is expected to more than triple in size. By 2021, the FAA predicts, 3.55 million drones will be registered. The high end of the of the predictions had it at 4.47 million. The low end was still nearly tripling the current 1.1 million units, with 2.75 million in the skies. According to the FAA, falling prices, improved technology, easier use and the growth of drones used for sport will drive the growth.

3. The waiver request breakdown is interesting. Keep in mind that an applicant can request more than one area in its application. Sixty-five percent of requests sought waivers for night flights, meanwhile 35 percent wanted to fly over people. The other top requests were BVLOS operations (19 percent) operating from a moving vehicle (9 percent) and altitude limitations (also 9 percent). These numbers could affect upcoming changes in regulations. “Future regulatory development will allow these types of operations on a more routine basis,” the report says. “Meanwhile, analysis of these waiver applications allows us to understand industry trends, one of many metrics that is essential for projecting both the trajectory and growth trends of the sector.”

1. They expect even more growth for the commercial, non-hobbyist fleet. By 2021, the numbers will reach 442,000. That’s more than 10 times the current number (42,000). The average annual growth rate will be more than 58 percent during the 5-year period.  The high end predictions were 1.6 million while the low end was still a huge increase to 238,000. The administration predicts most of the growth will come from the consumer grade small UAS, but “a significant portion of the commercial growth will come from professional grade UAS as well.”

The FAA is certainly bullish on growth in the drone industry. The document has several other notes that are interesting if you really want to dive into it.

For example, the FAA offered a few maps that showed where commercial and hobbyist drone ownership is concentrated in the United States. Of course, the high levels of ownership tended to correlate with high population levels. But the map is still interesting to analyse. 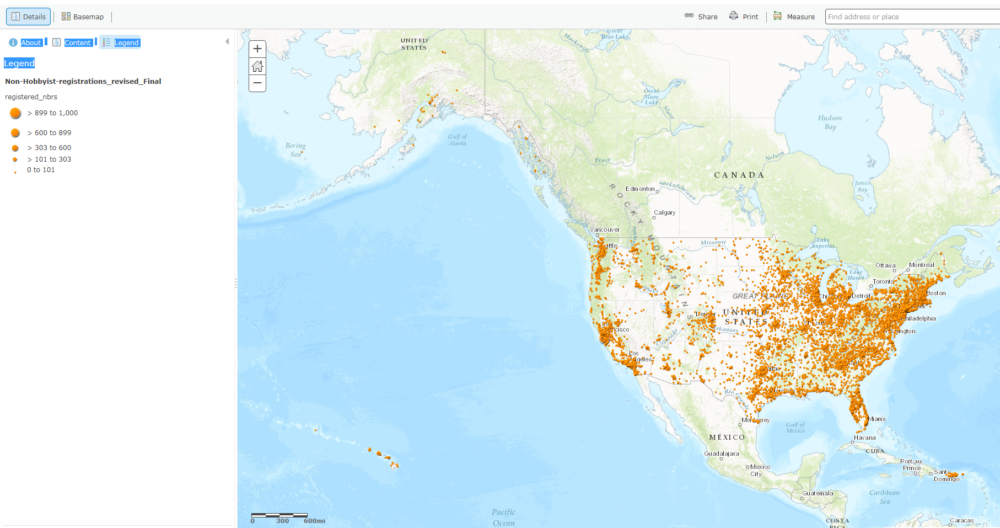 Patrick Abdalla is editor of DARTdrones. DARTdrones has a roster of dozens of expert pilot instructors who can teach you how to use drones for your business. Abdalla wrote this post about the FAA drone predictions.