The farming industry has thrived on the advancement of technology. One of the most notable improvements in agriculture was the invention of the steel plow in 1837 by John Deere. Farming technology has advanced extremely far from the days of plowing a row of a field at a time. Today tractors and threshers use GPS to help the farmer know exactly where he is in his fields and how he can get the most out of them and also using drones for farming.

After talking with two farmers in Southern Missouri, Ray Presson and Jesse Surface, they both agreed that technology has a lot to do with modern day farming. Both were very interested in how drones for farming would help famers in the future. 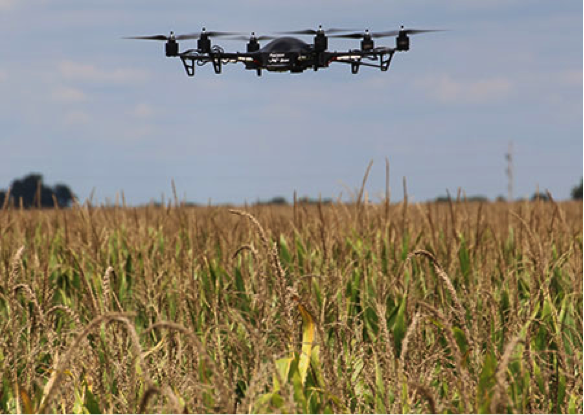 Jesse works as regional agronomist in the Midwest and advises farmers on how they can get the most out of their fields and produce better, healthier crops. He said that drones are present in the farming industry but not as much as they should be. Surface said a drone would help him in his day to day work; however, the current FAA laws prevent him from being able to use one.

Drones for farming could also help farmers see how well pesticides and fertilizers are working on different parts of their fields. Surface said that a drone can save a farmer a lot of time and money if he knows how to use it.

Ray Presson also said that using drones for farming would significantly help with crop surveys on his farm in Southeast Missouri. Walking through a field is really the only way to survey crops, and as those crops grow it gets harder and harder to survey as they grow bigger. Surveying usually takes place in a couple areas around the edges of the field and is very time consuming.

Presson said that a drone would allow him to see the crops/fields in a new way, such as where the low spots in the field were and where crops need more water/nutrients. He also said he would be able to survey multiple fields at a time, reducing the time that it would take to survey on foot.

Most farms in the Midwest use pivot irrigation systems to water their crops. These have to be inspected regularly for the watering of crops. Inspecting them when crops are in the ground gets progressively harder and harder as they grow. The use of a drone would allow a farmer to inspect each nozzle without having to wade through his growing crops. Presson expressed how much time it would save if he were able to use a drone.

Drones will hopefully be used in a wide variety of fields in the coming years if they keep progressing at this rate. They will help cut costs and save people valuable time and allow them to be more productive in their specific field.

What field do you think would benefit from the use of drones?