Most drone stories in the news highlight how a pilot has flown their drown into a dangerous situation that lands them in trouble. There are very few stories that show drones doing good. This post is going to highlight great, lifesaving uses for drones.

Zipline International is using drones to bring blood and drugs into rural Rwanda towns. Urgent deliveries will be dropped to people in need via drones. These 22 pound fixed wing drones have a maximum payload of 3.5 pounds and have a range of 75 miles round trip.

These drones once loaded up with their payload fly by way of GPS. The trips are usually under 30 minutes; therefore, the blood/drugs do not need to be kept cold. Zipline International plans on setting up delivery hubs that will have 10-15 drones to deliver helpful payloads all across Rwanda.

In 2014 a video hit the internet called “The Whopper Dropper”, which featured a drone that dropped Burger King Whoppers to the homeless in San Francisco. At first people thought that it was an undercover marketing campaign by Burger King; however, it was a simple way to prove that drones can be used to deliver small packages.

The “Whopper Dropper” was a great way to help out the homeless community as well as prove that drones can be used for simple delivery tasks in an urban setting.

The Director of Education at DJI, Romeo Durscher, gave a presentation at the Drone Educators Conference about the various careers available in the drone industry. He talked about how the media plays a big role in the public perception of drones. The United States media tends to focus on the bad drone stories rather than the good ones. Changing the public perception about drones in the United States is crucial, so people can realize how many other ways drones can be used besides just photography.

Last May, Texas saw record flooding and a drone helped flood victims survive. Garrett Byrl partnered up with the local fire department and offered his services. He used his drone to fly lifejackets and safety lines to flood victims. Flying the drone close enough to the trapped people with a life jacket or safety line, Byrl helped speed up the rescue efforts of the fire department. 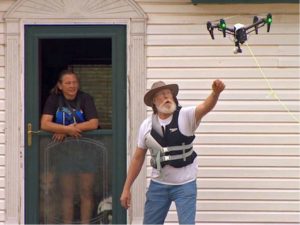 If the media started reporting on how drones can really help save lives instead of just being a nuisance, the public perception would change drastically. It is inevitable that with the advancement of drone technology the price of drones will go down and they will be everywhere. It is on the leaders in the drone community to make sure that drones are used responsibly and in ways that can better the community.