This post is designed to spotlight some of the best drones on the marketplace right now and is a guide on finding the right drone for you.

DJI sells a wide range of drones for all drone enthusiasts, all the way up to the professional level. If you are looking to spend a little more and want to take more professional videos with a DSLR camera, DJI’s Spreading Wings Pro System is the drone for you.

It is on the higher end of the drone price range; however, if you are seeking a sturdy platform to mount your camera to, the Spreading Wings S900 or S1000 is the right drone for you. DJI has packages ranging from $2,500 to $4,500 depending on the weight of your DSLR camera and what accessories you would like. The Spreading Wings drones have retractable feet which provide a 360-degree view and allows the pilot to rotate the camera on a gimbal allowing for 360 degrees of uninterrupted video shooting. 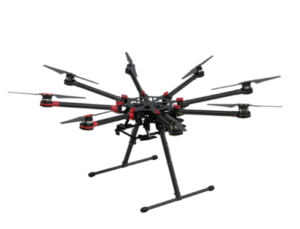 If you are not looking for a drone to carry a DSLR but still want great quality footage DJI’s Inspire 1 or Phantom 3 Professional would be for you. Both support raw video capturing and 4K footage and can be used for professional photography. The Inspire is on the lower end of the price range at $1,200 where the Inspire is at the higher end $3,000. The one major advantage that the Inspire has over the Phantom is that the feet lift out of the way and allow for 360-degree video capturing, whereas the Phantom has fixed feet. 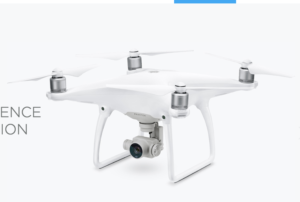 DJI’s cheapest drone is the Phantom 3 standard at $500. This drone allows a novice pilot to capture great photos and videos. The Phantom 3 has a 12-megapixel camera mounted on a gimbal. DJI says that no matter how you fly the Phantom 3 the video the camera is taking will look “movie quality”. If you are unsure if you will make use of such an advanced drone like the ones above this would be a great place to start. Starting off with a drone on the lower end of the price range is a good idea because you may crash at some point, and fixing a Phantom 3 is much less expansive than some of the other drones on the market.

All the DJI drones come with an app that can be installed on a phone or IPad that allows you to control the drone settings and lets you see what the camera on the drone is seeing. Along with being able to fly the drone where you please, DJI has some settings that include: point of interest (POI), follow me, waypoints, and IOC. Point of interest allows the pilot to set a GPS coordinate on the app and and this tells the drone to always face that POI no matter where it goes. Follow me is exactly what it sounds like, the drone will follow you and film you wherever you go. Waypoints allows you to set multiple POI’s and the drone will fly from one to the next to film them. IOC, which stands for intelligent orientation control, lets you choose the setting that is easiest for you to control the drone in the way you find easiest and best.

Two other interesting drones on the market today are the Parrot and Lily drone. Parrot makes mini drones for kids as well as other toys. The Parrot drones are controlled entirely from an app on a phone or tablet. These drones are geared towards a younger audience and not for professional photography. 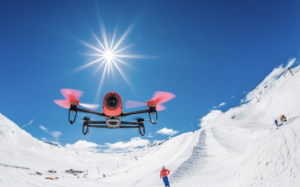 The Lily drone is different from all the drones mentioned above. This drone is perfect for someone who does not want to worry about flying the drone at all. The Lily takes off by being thrown in the air. Once airborne, it follows a watch that acts as the waypoint. Wherever the watch goes the drone follows while capturing footage. The Lily is great for action and extreme sports that are hard to capture. The Lily is only available for preorder currently; however, it has shown how versatile drones can be even without a designated pilot. 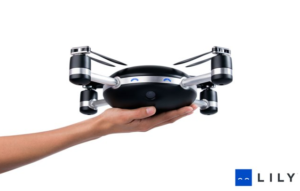 With so many more drones coming on the market it is important to be knowledgeable about drones before purchasing. Starting off with a smaller drone is recommended; however, with the right training flying a large drone can not be a problem. Knowing what you want to use the drone for is imperative before purchasing so you can get the best results.