If you’re feeling some butterflies about taking the FAA drone test, wondering how difficult the questions might be, don’t worry, you’re not along and we’ve got you covered!

Let’s decode 15 of the most difficult types of questions you might face on the FAA Part 107 drone exam.

These questions were taken from DARTdrone’s practice test included in our test prep course, which are meant to be more challenging than the formal FAA drone exam to ensure you have mastered the topics.

1)An aircraft announces, “left downwind for runway one six.” This means the aircraft is on a heading of:

This question draws on your knowledge of runway orientation. Runways are oriented based on prevailing winds and compass degrees.

Runway one six is at an orientation of 160 degrees. This pilot is on the left side, parallel and downwind of that runway, so he is on a heading of 340 degrees, 180 degrees opposite of his intended 160 degree runway.

2) What are the characteristics of stable air?

A. Poor visibility and intermittent precipitation

B. Poor visibility and steady precipitation

The poor visibility is due to particles in the air that are unable to rise, therefore they just sit in place, not moving or being swept away by turbulent air. Don’t be fooled by the terms “stable” and “good” as having similar connotations.

A. A rain cloud

B. A low-level cloud containing pellets

4) A nonfrontal, narrow band of active thunderstorms that often develop ahead of a cold front is known as a:

These thunderstorms are a precursor to an impending cold front. They form a line that can be miles across, fed by the warm air being pushed ahead by the colder air.

5) (Refer to Figure 2) If a UA weighs 33 lbs, what weight would the airplane structure be required to support during a 30 degree banked turn while maintaining altitude?

Find the degree of bank and multiply the weight of the aircraft by the load factor. 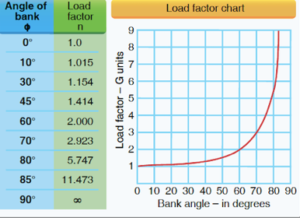 6) (Refer to Figure 21, Area 2) You have been hired to perform an inspection of the tower 1NM east of Garrison (D05). How high can you fly above this tower before an airspace authorization would be required?

A. Authorization required at the surface

This flight takes place in Class E airspace whose floor begins at 700 ft. If you intended to fly above 700 ft, an authorization would be required. 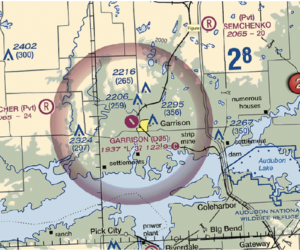 7. The lateral dimensions of Class D airspace are based on:

A. The number of airports that lie within the Class D airspace

B. 5 statute miles from the geographical center of the primary airport

C. The instrument procedures for which the controlled airspace is established

Class D airspaces’ lateral dimensions are individual to the instrument procedures in place for that specific airspace, and typically extend vertically from the surface to 2,500 above the airport elevation charted in MSL.

8) What is density altitude?

Temperature and altitude, and air density have an inverse relationship; as the former increase, the latter decreases. Warm air is less dense than cold air, therefore providing fewer air molecules to aid in aerodynamics.

9. (Refer to Figure 26, Area 4.) You have been hired to inspect the tower under construction at 46.9N and 98.6W near Jamestown Regional (JMS). What must you receive prior to flying your sUAS in this area?

A. Authorization from the military

B. Authorization from ATC

The question must be read carefully, as there are no towers at exactly that point, however there is one tower that is under construction, and that’s what you’re looking for. This tower is in Class E surface airspace, which does require authorization from ATC. It is not in a military zone, and you would not ask for permission from the National Park Service. This is a tricky one. 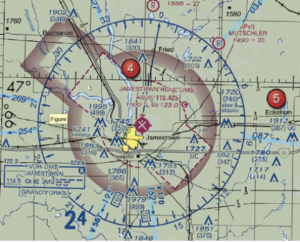 10) To avoid a collision with a manned aircraft, you had to climb your unmanned aircraft to 600’ AGL. To whom must you report this deviation?

B. The Federal Aviation Administration, upon request

If the FAA requests a report of the incident, then you’d submit one. The ATC authorizes flights, and the NTSB becomes involved if there is a serious incident resulting in damage or injuries.

C. The National Transportation Safety Board

11) In which situation is advection fog most likely to form?

A. a warm, moist air mass on the windward side of mountains

B. an air mass moving inland from the coast in winter

Advection fog is most likely to form in coastal areas, with warmer air moving over the cold ground causing fog to form.

C. a light breeze blowing colder air out to sea

12) (Refer to Figure 76) What is the minimum altitude/elevation of the area depicted by the blue line labeled V71? 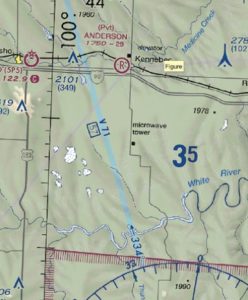 13) Crests of standing mountain waves may be marked by stationary, lens-shaped clouds known as:

Lenticular clouds indicate high winds. It’s helpful to think of them as lens-ticular clouds to remember their characteristic lens shape.

14) In the following METAR excerpt, what indicates wind conditions?

Wind conditions are described here as variable at three knots.

15) What indicates the period the following TAF is valid?

The TAF is similar to the METAR except that it has a period of validity, in this case from 1302 to 1412. 130520Z indicates the date and time, and 17014KT indicates the direction and velocity of wind.

There are many topics on the FAA drone test that require more time, concentration, and invaluable extracurricular practice and study. Weather is a particularly important and lengthy subject that catches new pilots off-guard. Spend a little extra time on this, and chart interpretation.  Sign up for DARTdrones Part 107 test prep and get access to complete modules that walk you through every subject. You’ll take a practice exam that provides 300+ test questions so you can focus your efforts on topics that need more attention.

Make sure to take your time and think critically about the questions being asked of you. They’re comprehensive puzzles to solve. You’re essentially learning a new language by training to become a drone pilot. Enjoy the process; you’ll retain more than you thought possible! 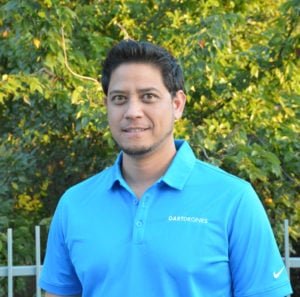